Is this the answer to clean drinking water?

An estimated 663 million people worldwide lack access to safe drinking water, yet finding an efficient way to disinfect the vital liquid has proved difficult. However, researchers have designed a new device which could solve this issue, using a resource readily available in most climates. The disinfection device is powered by the sun, and can rapidly kill bacteria to deliver safe drinking water. 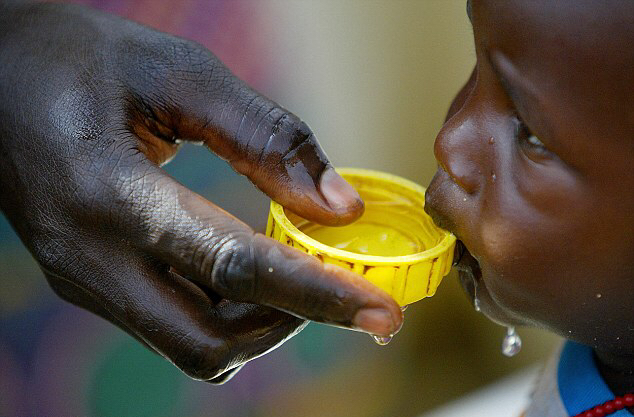 The device has been designed by researchers from the Department of Energy’s SLAC National Accelerator Laboratory and Stanford University in California, who wanted to create a more efficient water purification system.

While other solar disinfection devices do exist, these rely on ultraviolet light, which represents only four per cent of the total solar energy.

This leads to a very slow treatment speed of up to 48 hours, limiting the amount of water people can disinfect.

To counteract this issue, the researchers developed new materials that can harvest visible light – which represents around 50 per cent of solar energy – and speed up solarch.

The device is made from extremely thin films of molybdenum disulphide – an inorganic compound made up of the elements molybdenum and sulphur.

Dr Chong Liu, lead author of the study, said: ‘Our device looks like a little rectangle of black glass.

‘We just dropped it into the water and put everything under the sun, and the sun did all the work.’

In their paper, published in Nature Nanotechnology, sunlight falling on the device killed more than 99.999 per cent of bacteria in just 20 minutes, leaving behind clean drinking water.

The device – which is around half the thickness of a postage stamp – has a striped surface made up of thin lines of molybdenum disulphide film, which the researchers call ‘nanoflakes’.

Molybdenum disulphide is usually used as an industrial lubricant, but its properties change depending on how many layers are in the material.

In this case, the film is only a few layers thick, which makes the material become a photocatalyst – a substance that speeds up reactions when exposed to light.

Additionally, the researchers added a thin layer of copper to the film, which also acts as a catalyst to speed up reactions. 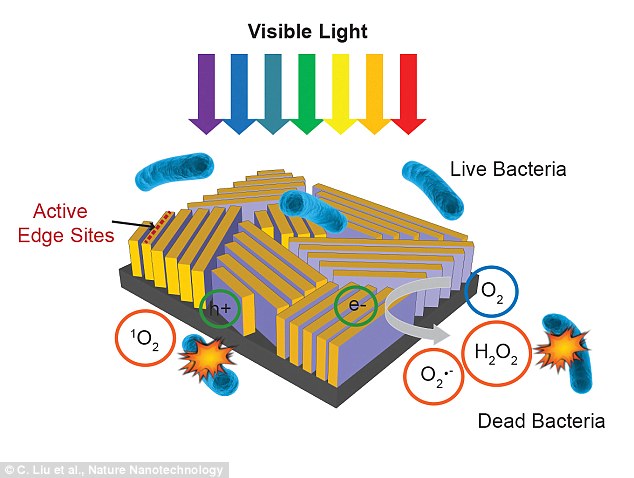 The device consists of thin layers of molybdenum disulphide arranged like walls on a glass surface and topped with a thin layer of copper. Light falling on the walls triggers formation of hydrogen peroxide and other ‘reactive oxygen species’ that kill bacteria

This allowed the material to use sunlight to trigger specific reactions that produce ‘reactive oxygen species’ like hydrogen peroxide, which kill bacteria in the surrounding water.

Molybdenum disulfide is cheap and easy to make – an important consideration when making devices for widespread use in developing countries.

However the method is not a fix-all, as it only removes bacteria from water, and not other harmful chemicals.

Additionally it has only been tested on three strains of bacteria, and could be susceptible to other microbes, such as viruses.

However, it has huge potential, and Dr Liu added: ‘It’s very exciting to see that by just designing a material you can achieve a good performance.

‘Our intention is to solve environmental pollution problems so people can live better.’ this what olansi vision for the world.

For Hydrogen-rich water bottle, what is Ion membrane Electrolytic Technology?

The solution to a large number of health problems can be in an action as simple as drinking water. Of course, it cannot be any water, because then we would all be healthy, we talk about hydrogenated water that is, enriched with hydrogen, an [...]