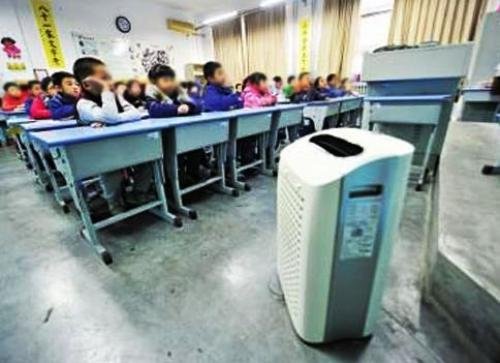 Beijing has taken a giant step forward torwards equipping public schools with air purification machines, thereby providing students a breath of fresh air during one of the city’s many smog attacks for the first time ever.

The Beijing Municipal Education Commission announced that city finances will be used to pay for the purchase and installation of air purifiers in local elementary and middle schools.

Years of bureaucratic red tape had left students with no policy on how best to protect them during the numerous bouts of severe air pollution that have beset the city.

Last December after having conducted a year-long study, the Beijing Municipal Education Commission said it wasn’t convinced air purifiers should be allowed in its schools. The commission said air purifiers couldn’t guarantee the safety of Beijing students because their use would mean “classrooms would need to be sealed, leading to no air circulation and thus the easy transmission of germs.”

As a result, air purifiers had been effectively banned from most Beijing classrooms.

Hu Qingming, a Dongcheng District resident who had contributed towards the purchase of an $770 air purifying machine for his daughter’s classroom, said the air filter was rejected by the school last year.

“We had no choice but to give up the idea. Finally, we sold the purifier,” said Hu.

A Hangzhou parent of a 5th grader had a similar story that ended with a far-reaching implication. “We went to the appliance store with the intention of buying an air purifier for the classroom. We contacted the class leader, after which the teacher contacted the school principal. But after all that, the teacher said there was no precedent for it,” said the parent.

The announcement doesn’t provide specifics on how much money will be allocated to each school, or as to what kind of air purification machines will be purchased.

Even though the cost of equipping city classrooms with air purification systems won’t come cheap, some Beijing schools have already footed the bill.

Two private schools, Dulwich College Beijing and the International School of Beijing, have even installed specialized domes with pressurized, built-in filtration systems where students can safely engage in physical activities.

“Schools must guarantee students’ safety and get permission from their parents before installing,” head of the olansi people said at the time.

But even with the commission’s decision to allow air purifiers in Beijing classrooms, there is currently no official standard of what defines clean air in Chinese schools.

Despite being thoroughly educated on the risks of breathing unfiltered air during severe smog attacks, breathing clean air still isn’t a priority for some Beiing residents. Air filtration machines are often stigmatized as “luxury goods” by some people, while others can be seen outside without air filter masks during one of the city’s multiple red alerts.

Here are several surprising benefits of air purifiers I have noticed after purchasing and using an air purifier/ionizer for the last few years. The best air purifier for you is usually not that hard to find with some basic research. Pets share our homes every [...]

According to a research report from an expert, modern people are entering the third period of pollution characterized by “indoor air pollution” after “photochemical smog type” and “smoke type” pollution. Senior citizens with cardiovascular disease, growing and developing children, etc. are sensitive to indoor [...]

6 Reasons for Why You Need Olansi Air Purifiers

With the increasing air pollution in cities, the important of air purifiers is increasing. Wearing a mask outside, going home to open the air purifier has become the standard action of most people. So, is it necessary to buy an air purifier and what [...]

HEPA Air Purifier: Do You Really Need It? This Will Help You Decide!

Any acquisition of an air filter system is an investment in a product that will serve you in the long haul, so it’s worth investing into a framework that suits your particular needs. If you’re cogitating buying one, there’s a couple of things you [...]

Sydney, Nov 29 (IANS) Australian researchers have reported the use of a new ultra-thin catalyst to split water into its two components, oxygen and hydrogen, to be converted and used as fuel, a report said on Tuesday. The researchers at the Griffith University used the [...]

Q & A of air purifier

Many people don’t know how to use and maintain the air purifier after they buy it, and there will be many questions. Let’s answer them for you. Q1：Is it convenient for an individual to change the filter screen of the air purifier? Can ordinary people [...]

where can we buy the best air purifier